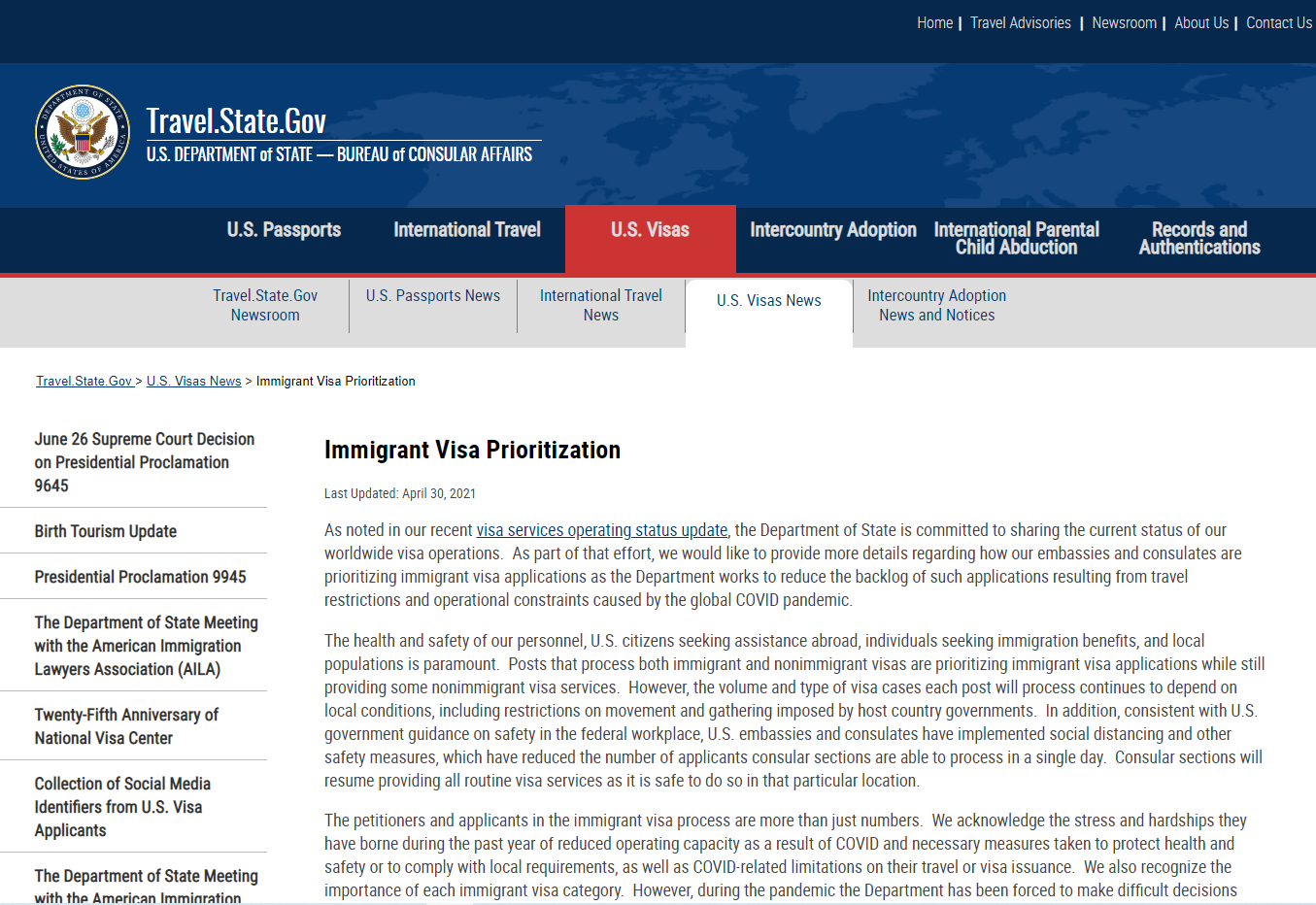 As noted in our recent visa services operating status update, the Department of State is committed to sharing the current status of our worldwide visa operations.  As part of that effort, we would like to provide more details regarding how our embassies and consulates are prioritizing immigrant visa applications as the Department works to reduce the backlog of such applications resulting from travel restrictions and operational constraints caused by the global COVID pandemic.

The health and safety of our personnel, U.S. citizens seeking assistance abroad, individuals seeking immigration benefits, and local populations is paramount.  Posts that process both immigrant and nonimmigrant visas are prioritizing immigrant visa applications while still providing some nonimmigrant visa services.  However, the volume and type of visa cases each post will process continues to depend on local conditions, including restrictions on movement and gathering imposed by host country governments.  In addition, consistent with U.S. government guidance on safety in the federal workplace, U.S. embassies and consulates have implemented social distancing and other safety measures, which have reduced the number of applicants consular sections are able to process in a single day.  Consular sections will resume providing all routine visa services as it is safe to do so in that particular location.

The petitioners and applicants in the immigrant visa process are more than just numbers.  We acknowledge the stress and hardships they have borne during the past year of reduced operating capacity as a result of COVID and necessary measures taken to protect health and safety or to comply with local requirements, as well as COVID-related limitations on their travel or visa issuance.  We also recognize the importance of each immigrant visa category.  However, during the pandemic the Department has been forced to make difficult decisions regarding how our consular sections should prioritize immigrant visa applications as they operate at limited capacity and as they work through a backlog of immigrant visa cases once they resume full operating capacity.  The guiding principle on which we have based immigrant visa prioritization is that family reunification is a clear priority of the U.S. Government’s immigration policy, a priority is expressed in the Immigration and Nationality Act (INA).  Specifically, the Department’s prioritization relied on clear direction from Congress that the Department must adopt a policy of prioritizing immediate relative visa applicants and K-1 fiancées of U.S. citizens, followed by family preference immigrant visa applicants.

Consistent with those objectives, U.S. embassies and consulates are using a tiered approach to triage immigrant visa applications based on the category of immigrant visa as they resume and expand processing.  While our consular sections, where possible, are scheduling some appointments within all four priority tiers every month, the following lists the main categories of immigrant visas in priority order:

Tier One: Immediate relative intercountry adoption visas, age-out cases (cases where the applicant will soon no longer qualify due to their age), and certain Special Immigrant Visas (SQ and SI for Afghan and Iraqi nationals working with the U.S. government)

Tier Four: All other immigrant visas, including employment preference and diversity visas

Many embassies and consulates continue to have a significant backlog of all categories of immigrant visas.  This prioritization plan instructs posts to maximize their limited resources to accommodate as many immediate relative and fiancé(e) cases as possible with a goal of, at a minimum, preventing the backlog from growing in these categories and hopefully reducing it. However, the prioritization plan also instructs posts to schedule and adjudicate some cases in Tier Three and Tier Four each month.  The Department recognizes that visa applicants, particularly those in Tiers Three and Four, will face continued delays.  We further acknowledge that certain programs, including the diversity visa program, operate on a fiscal year basis as required by law.  The Department values the diversity visa program and is making every effort to process as many diversity visa cases as possible, consistent with other priorities, despite the severe operational constraints and backlog resulting from the COVID pandemic.  However, as a result of COVID the number of visas issued in lower-priority preference categories or in such programs as the diversity visa program likely will not approach the statutory ceiling in Fiscal Year 2021.